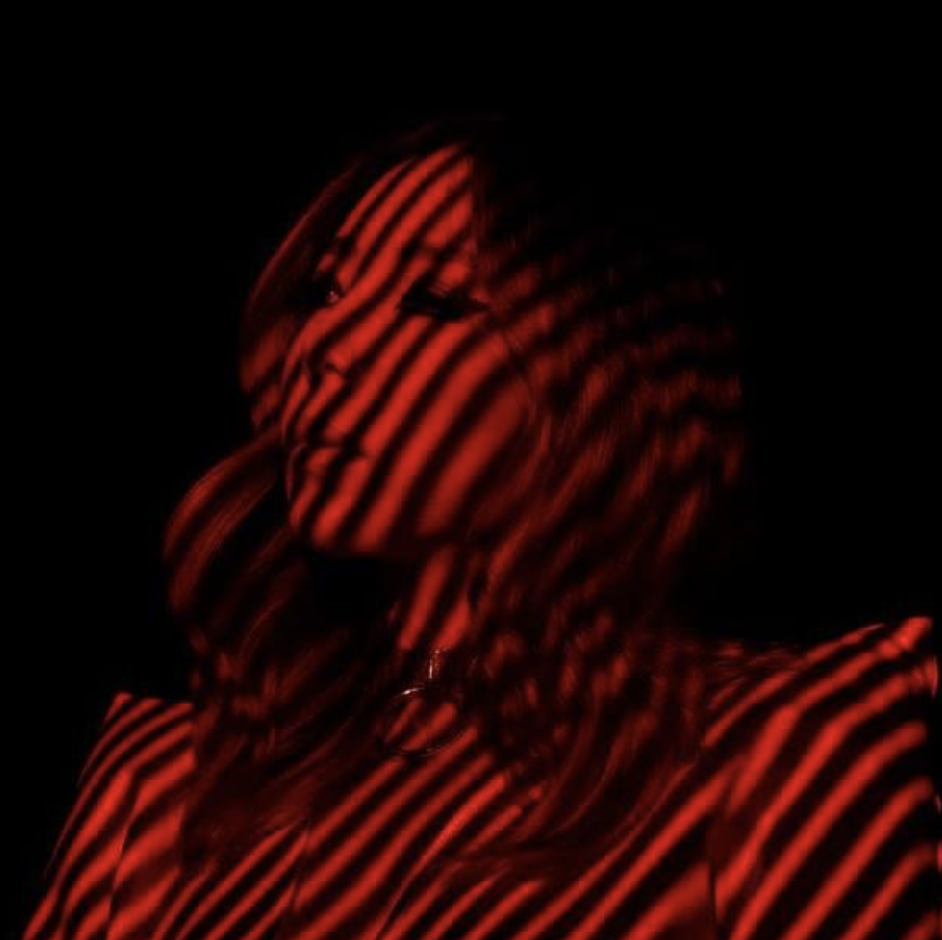 About 10 years ago, I started getting migraines. I got an MRI to make sure I didn’t have a tumor, and I also did an MRA, which shows the vascularity of your brain—the blood pathways. The scans were normal, except for this one little area where the vascularity in my brain was shrunken. The artery feeding the left side of my brain had shrunk 60 to 70 percent. It was only this one section, so they thought it was an anomaly. It was pretty stressful because I didn’t know what it was and no one had an answer for me. There was only one doctor who said, “This potentially could be this ultra rare disease called Moyamoya. You’re not symptomatic in other ways, so let’s watch it.”

Ten years later, in the fall of 2015, I had this weird episode where I was walking and suddenly I couldn’t feel my foot. It was a really strange sensation, like as I put my foot down there was nothing to stop my body from hitting the ground. I had a ghost foot. I was completely fine after that one moment, but it scared the shit out of me. That was the first time in 10 years where I was reminded that I still had that stenosis in my left carotid artery. It had been so long, my new doctor didn’t even know I’d had all these tests done in the past. I mentioned it to her and she was like, “OK, why don’t we get you another MRA just in case?”

I got a report from the radiologist saying that the stenosis had gone to 90 percent obstructed in two different areas. Instead of just having one little shrunken zone, I had two shrunken zones on the left and an additional two on the right side. At that point, the radiologist was like, “You’re completely symptomatic of having Moyamoya.”

“Moyamoya” is a Japanese word that means “a puff of smoke.” When your main arteries start shrinking, the blood still wants to reach your brain, so it starts taking these smaller, weaker collateral vessels. Usually you wouldn't be able to see those little veins, but because they’re taking more blood to compensate, it looks like a puff of smoke is coming from the base of your brain. If your arteries start to shut down and the blood starts to take these weaker vessels, you’re either going to have a stroke or an aneurysm or thrombosis. It just explodes, basically, because those veins are not meant to take on an artery’s worth of blood.

Without any treatment, most people don’t live past 40. Eventually your arteries shut off. I didn’t know how much time I had, and I was leaving on tour. You know how with medical stuff you have to usually get a referral and insurance and all sorts of crazy shit? It’s a really convoluted process to get treatment. But I was a ticking time bomb. I was really desperate and scared shitless. So I went online and found that the leading institute for this really rare condition was at Stanford, and I found an email address for the head nurse at the neurosurgery department. She replied to me, I sent them my paperwork, and they were like, “OK, come in.”

Dr. Gary Steinberg, who’s the head of this Moyamoya research team, told me I needed treatment right away because there was no way to tell how quickly it would progress. The only way to treat Moyamoya is brain surgery. I had two options: either sit with it and possibly die thinking about what I should do, or do the surgery as soon as possible. That was December 2015. I set up surgery for the first week of January.

The only people who knew at that point were my mom, my boyfriend, and my sister, who took care of me despite having her own family. I told my business manager because my business manager had to help me create a will. It was very sobering. Your life is never, ever just your life. Your life is a part of everyone else’s life, and so there’s a responsibility to take care of yourself not only for yourself, but for other people too—like my family, my friends, and all the people who listen to my music. Eventually a very small handful of very close friends knew that I was going through this, but no one in music. I didn’t announce it online. I wanted to avoid anything like, “Hey, everyone on the internet, by the way, I might die!”

The occlusion was on both sides of my brain, so I had two brain surgeries a week apart. They took the arteries that fed my scalp and laid them over the surface of my brain. What ends up happening is that branch of artery that’s laid on top of your brain starts going down, like the roots of a plant, and it starts feeding your brain from the top. Obviously they’re touching your brain, so you’re at risk for stroke and aneurysm. The other risk is the whole thing might not work.

I made it through the surgery. Afterwards, they don’t let you sleep. They wake you up every hour to do neurological tests to make sure you’re still intact. Every hour, someone was asking me where I was, what day it was, who I was, and then making me do all these pointing tests while I’m on a lot of opiates for the pain and also vomiting constantly. It was terrible.

After the first surgery, I had a couple of childhood friends come visit. I was tired but fine—joking with them, playing dominos. It was looking good. The day after they left, I couldn’t talk or understand speech. I could still think thoughts, but all the words I knew were gone. I even tried texting people and my texts were complete gibberish. It was almost like suddenly I spoke a different language than everyone else. I’m a fairly chatty person, and to take that facility away was just a visceral pain. But the worst part was that I couldn’t understand any kind of music whatsoever. It didn’t sound right.

As time progressed, my language got better and better. On my birthday, January 26th, I had my last scan that said the surgery was successful and I got to go home. My speech was at about 70 percent. I could communicate, but I would have frequent brain farts. Also, because I basically had been sitting in bed 24 hours a day, I lost all the muscle tone in my body, so it was really difficult for me to walk.

The whole month of February [2016], I tried to acclimate myself to my life again. The most difficult thing was trying to work on music. I opened Ableton and I couldn’t understand what I was doing, even though at that point my speech was at 90 percent. I tried to make music and it was just garbage. The part of my brain that knew how to put sounds together was broken. I didn’t understand why it didn’t make sense anymore. When you make music, so much of it is intuitive and natural. I could always put sounds together, play a little ditty on the piano. I never had to think about doing it. And then I’m there in front of my computer going, “I don’t understand if this is a good sound or a bad sound. I don’t know if I’m playing a melody.” I didn’t want to pity myself, but it was a heart-wrenching pain.

So I stopped. I gave myself room to recuperate. I maintained hope that my ability to create music would come back. I’m glad I did, because I think if I had pushed myself I would never have found the music again. With the aphasia, if I forced myself to remember a word, it would never come. But if I took the pressure off myself, I would be able to find that word. I gave myself a couple weeks with music to be like, “Just don’t touch this shit—chill out, work on other aspects of your life, try to be normal again.”

At that time, my boyfriend broke up with me—after my surgery, after taking care of me. I got dumped by someone I loved a lot while I was still recovering from surgery, still slightly unable to walk, still working on my language, still unable to make music. That moment was probably the worst I’ve ever felt in my entire life. But that sadness allowed me to regain some clarity. I knew I had to overcome it.

The very first successful song I wrote after this whole ordeal was “I Wish I Could Be” [featured on Lune Rouge]. I wrote the instrumental and finally felt a sense of completion, like, “I’m back! This is a good song.” I was given that glimmer of hope that everything would be fine. “I Wish I Could Be” features [Belgian soul singer-songwriter] Selah Sue on the vocal component. I’ve still never met her in person or spoken with her on the phone, but we communicated over email. I was very forthright and told her my whole situation. She was going through her own personal hardship. We had never communicated with each other before, but we became friends, sending long emails back and forth. She made a point to write lyrics that were meaningful to me, but that were meaningful to everyone, too.

After facing that experience, I thought, “You know what? This album isn’t going to be made to satisfy the needs of an industry or the needs of a trend. I’m just going to make songs that make me happy, and I really hope they make other people happy, too.” That’s not to say that this is a happy album, but the whole process of creating it was very cathartic for me. It’s my most personal piece of work. Because I’m making beats, it might not be as obvious, but each of these beats—all these songs I put together—tell a story.

I got that surgery in January 2016. By the end of March, I went to SXSW and by April, I played Coachella in front of 15,000 people. I went on full tours after that, and still no one knows that I went through this whole experience. I’m sharing the story now to bring light to Moyamoya, because it is such a rare condition, but also to give attention to all personal struggles. I think people sometimes forget that artists are human. We all go through really terrible things and face hardships. Being able to play Coachella three months after having the surgery was very significant to me. If I can do something like this, anyone can. 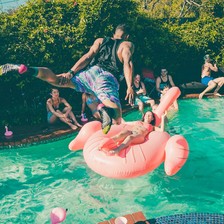 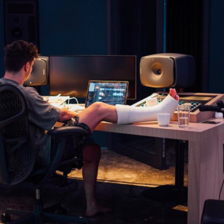 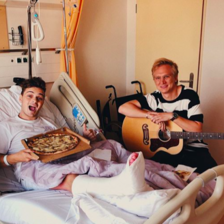 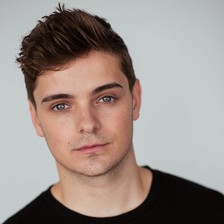 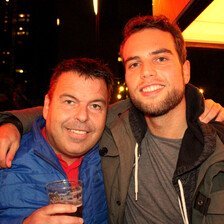 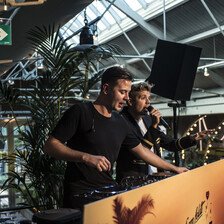 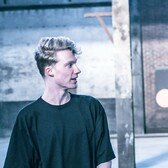